Was the wreck of the Clara Nevada a terrible accident or the greatest mass-murder in Alaska history? 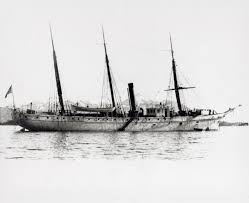 Superstitions swirl around boats, and some captains believe bizarre myths. Renaming a vessel remains foremost among the maritime harbingers of bad luck, and if you dare change the name of your boat, you must follow a strict protocol to avoid certain doom. The Clara Nevada did not even complete her maiden voyage under her new name. Is this boat the case study to prove the truth of the old mariner’s superstition, or did her captain plot her demise?

On February 5, 1898, the SS Clara Nevada departed Skagway, Alaska, headed for Juneau and then Seattle. Hurricane-force winds of 90 knots (100 mph 161 km/h) pummeled the vessel with following seas of twelve to fifteen feet (4-5 m) as the helmsman attempted to navigate the infamous Lynn Canal of Alaska’s Inside Passage. When the decrepit old ship reportedly struck a rock and sank, the news surprised no one. Searchers found the body of only one man, the ship’s purser, but news reports speculated no one survived such a horrific accident.

The loss of the Clara Nevada at first seemed a tragic but foreseeable accident, and no one doubted the negligence of the ship’s owners and captain. Before long, though, folks began asking questions, and the Seattle newspapers speculated wildly about the disaster. Crewmen believed to have died in the wreck turned up alive and well. Even the captain materialized and wasted little time beginning his next venture to ferry prospectors to the goldfields.

What happened on February 5, 1898, aboard the Clara Nevada? Was the wreck an accident, or did the captain and a few crewmen perpetrate the worst mass-murder in the history of Alaska? 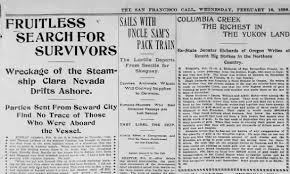 The Clara Nevada; Gold, Greed, Murder and Alaska’s Inside Passage. Levi, Steven C. 2011. History Press. This book was my main source for this article. It covers the sinking of the Clara Nevada and the exploits of Captain C.H. Lewis in much more detail than I’ve included here. The author also describes the challenges involved in trying to research a maritime disaster in Alaska in the late 1800s. I highly recommend this book to anyone who would like to learn more about the Clara Nevada or get a feel for the atmosphere in both Seattle and Skagway during the Klondike gold rush.

Gold on the Clara Nevada: Cold Case Gets Hot. National Underwater and Marine Agency. Available at:

Gold on the Clara Nevada: Cold Case Gets Hot